Are You Ready for Bitcoin to Go Mainstream?

When we launched PayStand almost one year ago, most of our early customers had never heard of Bitcoin, or if they had, they were skeptical about accepting it in their organizations. Silicon Valley is abuzz with development and investment in Bitcoin-related technology, but as in the early days of the Internet, there is speculation, volatility, and media frenzy surrounding the virtual currency. Several business owners and nonprofits we spoke with have adopted a “wait and see” approach, but like having the option to enable Bitcoin in the future. At PayStand we offer our merchants one payments platform with traditional methods alongside Bitcoin (which we call "eCash"), so they can extend the option to their customers when they're ready. 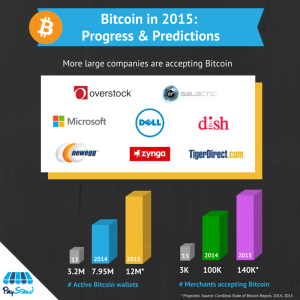 Over the past twelve months, Bitcoin has come a long way in penetrating the public consciousness. Major corporations, banks, governments and tech companies have made headlines by announcing support for Bitcoin and its underlying infrastructure, the Blockchain. Big e-tailers like Dell, Expedia, Dish and 1-800 Flowers started taking Bitcoin, California became the first state officially to legalize Bitcoin transactions, and venture money continues to pour into Bitcoin tech companies. Clearly, Bitcoin is gaining legitimacy in the highest levels of business and government, as evidenced by efforts to regulate and tax the currency. So what do these early Bitcoin players see that the rest of us don’t (yet)? And as business owners, what do we actually need to know?

Bitcoin is the cash of the Internet

Bitcoin is the first truly digital currency. It is created (“mined”) by computers rather than issued by a governmental authority. Its value is derived from the system's distributed architecture, which limits Bitcoin production and caps the total number of Bitcoin that can be circulated. While the relative value of Bitcoin to state-issued currencies has undergone wild fluctuations in the past few years, in large part due to a gold rush mentality among investors, many experts believe that prices will stabilize long-term as more merchants and consumers use Bitcoin for day-to-day transactions.

Like cash, a Bitcoin transaction is anonymous and final once completed. The buyer pushes their Bitcoins to the seller, in much the same way as they’d pull cash out of their wallet and hand it over. Bitcoin transactions are ideally suited to consumers with smartphones, since they can be validated quickly and don’t require any additional hardware or accessories. Unlike credit card transactions, where the actual money transfer lags days behind the "swipe" or "click," Bitcoin transactions happen in real time.

Bitcoin cuts out the middlemen

Traditional credit card processing involves layers of banks, processors, insurance companies and law firms. That’s because credit card transactions are actually complex loans, both to the buyer (who hasn’t actually paid for the item until they pay their credit card bill) and to the merchant (who gets paid in advance before the customer has paid). In contrast, Bitcoin transactions take place between computers. The funds are either there or they’re not, and the ledger that records the transactions (the “Blockchain”) cannot be tampered with or influenced by any third party.

Bitcoin lets you keep 100% of your sales

From big corporations to the shop on the corner, merchants are so used to giving a cut of their proceeds to credit card processors that they simply consider it a cost of doing business. But accepting Bitcoin is free—with no transaction fees to the merchant or interest charged to the buyer. It will take a change in behavior, but not too big a leap of imagination to see why merchants will gravitate toward Bitcoin as a payment method. For a big company like Dell or Microsoft, the 2-3% on credit card transaction fees can add up to millions of dollars per year. There will no doubt be companies who will try and charge fees on top of Bitcoin transactions, but the actual cost of a Bitcoin transaction is zero (and we believe it should stay that way.)

At PayStand, our goal is to level the playing field and lower fees for all merchants so they can keep more of their revenues. So we’re excited about the potential for Bitcoin to make a big dent in merchants’ transaction costs. We also get that mainstream adoption is still a ways out in the future, so we’re enabling members of the PayStand community to experiment with taking Bitcoin alongside credit cards and direct bank debit (eCheck). Our merchants can simply turn on Bitcoin as a payment option on their websites, and the PayStand checkout will display the amount due in both Bitcoin and dollars for reference. If at any point a merchant wants to pause the Bitcoin option, they can just toggle it off in their PayStand dashboard.

We encourage our merchants to experiment with offering Bitcoin as an alternative payment method for their customers. Like the early adopters we mentioned earlier, this could be a wave you want to get out in front of.