When we first started talking to business owners and nonprofits about lowering their transaction fees, we were surprised to discover that many of them had no idea what they were currently paying to accept credit cards. So, we offered to take a look at their current merchant statements to find out. What we found was even more surprising: most of the statements showed that these merchants were paying a lot more than the percentage rate they were originally quoted for credit cards. It took some digging to figure out the effective rate being paid, however, because merchant processor statements are universally inscrutable.

These conversations have made us realize that hidden fees, byzantine contracts and intentionally confusing reports are the secret weapons of payment processors. When a merchant statement makes your eyes glaze over with mysterious codes and abbreviations, and calling them up just confuses matters even more, you may just stop looking at them. In the meantime, you may be paying higher fees than you thought you signed up for, and your payment processor might be raising them without your realizing (because of a clause in that impenetrable contract that allows them to!)

Our mission at PayStand is to leverage the power of numbers to lower transaction fees for everyone. We also understand that you have better things to do than research the intricacies of the credit card industry in the hopes of getting marginally better rates. So, we decided to compile our methods and tips into our first Merchant Success Series: PayStand’s Guide to Understanding Your Merchant Statement. Because knowing what you’re currently paying in fees is the first step to lowering them—and we’re talking about savings of hundreds or thousands of dollars a month. 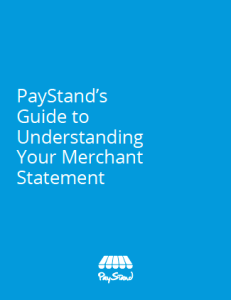 The PayStand Guide to Understanding Your Merchant Statement will explain why some transactions are charged at much higher rates than others, and what those mysterious codes in your statement actually mean. We’ll show you how to easily calculate your effective rate from the totals at the end of your statement (because most of the time, they won’t actually tell you the percentage you’re paying!) And we’ll arm you with insider tips for making sure you’re getting the best deal on credit cards going forward, whichever payment processor you decide to go with. After all, it’s your money, and you shouldn’t be handing over any more of it than necessary for credit card processing.