“You never change things by fighting the existing reality. To change something, build a new model that makes the existing model obsolete.”

It starts with an earthquake

Have you ever stopped to wonder why it costs your business money to receive your money? Or why your business must forfeit 3% or more of your earned revenue to an intermediary for moving 1’s and 0’s between bank ledgers? It’s a simple question, but one that has many layers. It involves complicated algorithms and tedious risk assessments, but ultimately, it boils down to one thing: the infrastructure and entities that control the movement of money were designed for a much smaller, consumer-oriented purchase.

Specifically, card networks were never intended to be a primary facilitator of larger business-to-business payments. But over time, with few other options to accept digital payments, card networks crept into every aspect of commercial finance. And, once let loose on the business world like an apex predator on a fragile ecosystem, they’ve run amok with an insatiable appetite. In this case, for your hard-earned revenue. 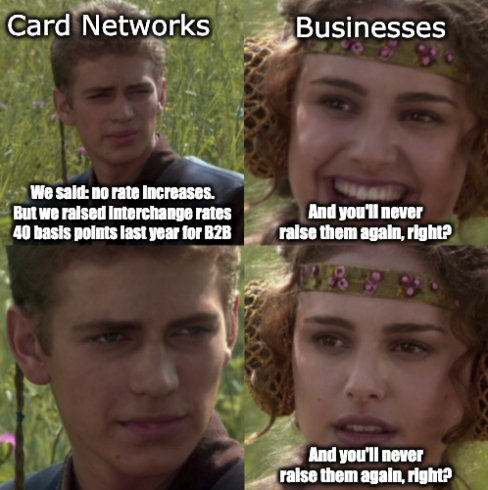 Every time money changes hands – every time businesses make or accept payments – the card networks extract a portion of your revenue in the form of interchange fees. Sure, fees are annoying and they generally have increased over time, but that’s just part of doing business, right? Wrong. That’s the narrative the card networks and gatekeepers want you to believe. But it’s so surreptitiously woven into the fabric of how we exchange value that it floats under the radar, unchallenged.

And without anything to halt it, the cycle continues – like the temperature in a pot of water that’s slowly raised until the frog within it boils alive without ever noticing. This does little to incentivize us to use our money to feed the economy and empower the individuals and businesses that participate in it; instead, it punishes us for doing the one thing we're supposed to do with our capital – spend it.

But here’s a crazy idea: imagine a system where every time money changed hands no one demanded a cut – a system that would let you send and receive payments with 0% transaction fees while still feeling as effortless and intuitive as calling an Uber. Don’t let the card networks know, but it’s actually possible.

Card networks like Visa and Mastercard operate in a way that's not unlike traditional monopolies – they raise fees on a whim, and the rest of us, especially merchants, are forced to comply. Recent events shine a light on this behavior.

At the beginning of 2020, Visa and Mastercard announced their plans to make the most significant increases to interchange rates in over a decade. But, with the effects of the pandemic in full swing and with rising pressure from merchants, trade bodies, and lawmakers, Visa and Mastercard both acquiesced to push the new interchange rates back – this time to April 2022. Or that’s what they’d have us believe.

Here’s the reality: the card networks are simply telling well-written PR narratives about pushing back rate changes, but that’s only when it comes to consumers. In the background, they quietly raised interchange rates for many businesses a whopping 40 basis points. And no one said a thing. And no one could stop them. This is the definition of a cartel, or at the very least, a duopoly. These changes could cost merchants up to $698 million annually. They’ll also impact B2B companies in the most significant way with interchange rates exceeding 3% of the transaction.

How could this happen without an uproar? Throughout the years, the card networks have seen a fusillade of lawsuits, but little has been done to deter them when it comes to rising fees. We’ve heard the justification for these costs thousands of times: "It's a fee for the convenience of transacting through our network, and we’re just opening up more payment opportunities for our customers." But that bold lie is a major reason why the United States is still only ranked 20th in the world when it comes to the index of economic freedom. In 2007, Bill Gates himself credited interchange fees as the key reason keeping Microsoft from being competitive in online micropayments, proving that even the mightiest among us have been wounded by this punitive system.

As a result, it’s likely that there are thousands of businesses not being built and even more tech innovations jettisoned as a result of the enormous number of transaction fees forfeited to the card networks each year.

Think about it like this: rising interchange rates are analogous to the oil industry. The few who are in power have the rest of us in a chokehold, and they have no problem exploiting us or the environment if it helps them maintain their monopoly. There's no question that we need to move off of oil and embrace renewable energy sources. There's also no question that the commercial finance industry needs a full reboot so that businesses are free to grow without punitive and arbitrary costs.

That’s why we’re taking a stand.

Offer me solutions, offer me alternatives

As a company, our mission has always been to reboot commercial finance in order to create a truly open industry that rewards businesses for their growth. An industry of this nature would be based on transparency, empowering businesses and consumers to make financial decisions that help them in the long run. It’s a concrete reality that Paystand has been quietly working towards for the past several years, and now, we are involving more and more companies than ever before.

Today, we are taking our boldest step yet in countering the interchange madness. We’re giving all merchants on the Paystand platform two key solutions to help them move payments off the penalizing card networks altogether.

This is how we push back against the incessant rising tide of interchange rates – by giving merchants money back directly into their bank accounts and by incentivizing merchants and payers to use cheaper, more secure alternatives. Say it with us: I feel fine.

There is a very tangible opportunity to restructure the way our financial system operates, and we believe blockchain is the blueprint. This decentralized technology is secure, immutable, and free of human bias or politics. It allows for the transfer of funds and information and timestamps these activities without the need for a third party or an intermediary, and it is the foundation for the Paystand payment network.

Today, Paystand is empowering businesses in healthcare, manufacturing, renewable energy, food, hospitality, and retail. We help them save an average of 50% on the cost of their receivables every year by eliminating outrageous transaction fees and speeding up their time to cash by over 60%. During the outbreak of COVID-19, we saw that Paystand’s infrastructure and payment innovations were instrumental in saving companies that would have been lost to the sudden economic downturn.

However, this is only the beginning. The card networks still control vast swaths of the commercial finance landscape, and it will take a collective effort to move off the legacy fee-based system. We’re committed to changing the system, one business at a time, and together we can build a more open industry for all.

Feeling pretty psyched? Talk to our team to learn more about either of these solutions and join the no-fee revolution.